Well what a week it's been - what with birthdays, anniversaries and the start up of all the Home Ed activities.  I am leading a science session next week on sight and the eye so have lots of preparation to do, including preparing the dissection kit and sourcing the pig's eyes! 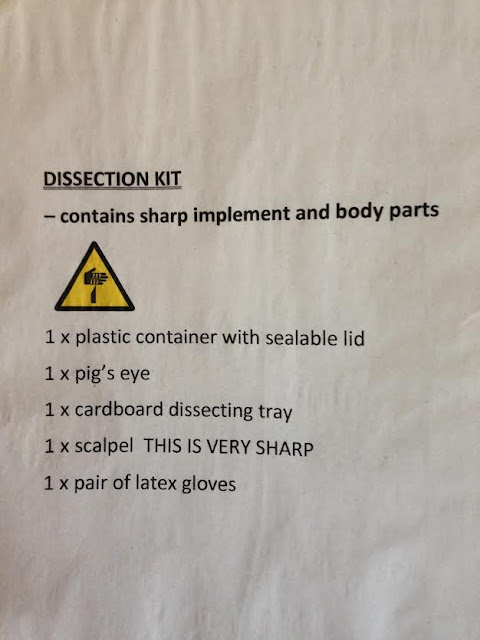 In more sewing matters I have started on my Dog Gone Cute blocks.  I have been somewhat slow in getting out of the blocks on this one and whilst I have myriad excuses reasons for this I think the only valid is good old procrastination!  I have never made blocks like this before and from someone else's pattern.  I'm not a pattern kind of girl and this has led to a whole lots of silly questions swirling around my head.  What is the best colour to use?  What if the background doesn't quite work?  What if I don't get the technique?  How long will the blocks take? What if I would have done it differently?!﻿  Really there was only one way to answer all those questions and it was to sit down and make one!  So I did.  One night after the girls were in bed I made the block below.  The colours weren't my choice but black, white and blue had been requested.  I have to say I like him and more importantly I liked the process! 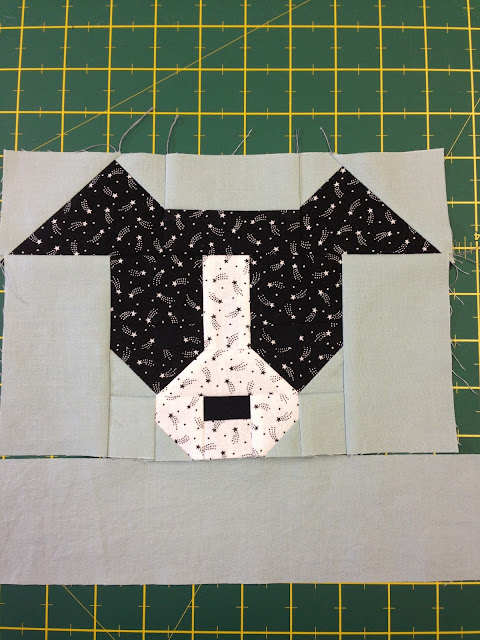 The pattern, created by Lorna from Sew Fresh Designs, is amazing.  There is a wonderful quilt along happening at the moment where you can makes these cute little pups for free!!  There were a couple of times when I thought this can't be right but following through step by step it all came together.  There are a few points not exactly where they should be but on the whole I was happy.  The one thing I didn't do (you see I told you I would change things) was to iron the seams open.  I have never ironed seams open and thought I would continue with ironing to the sides.  Well on the second one I decided to follow Lorna's advice ...... what a revelation!!!! 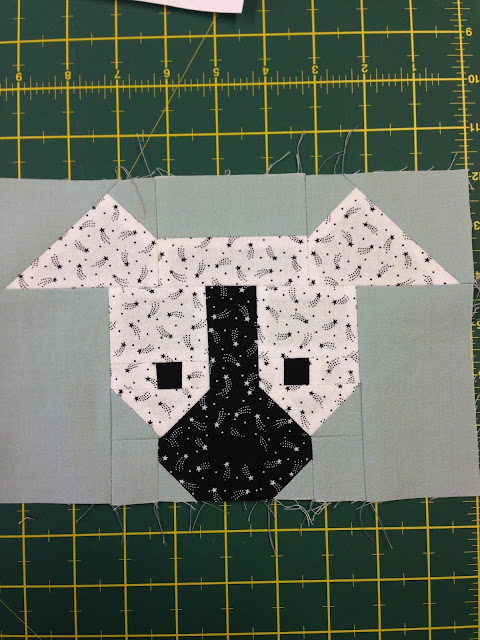 With all the pieces involved it made it far easier to iron the seams open and gave a much more accurately pieced block, especially on the blocks where you making triangular shapes such as the ears and muzzle.  These blocks were made to the small block size and were intended as a birthday present ....... but sadly the birthday has come and gone.  No worries I have another intended use for them!

My studio had gone a bit crazy whilst making Straight Line Bow and, having acquired some fat 1/4s at the shows I have been to recently, I realised a tidy was in order.  Bits and pieces of fabric were everywhere - can you believe it took all afternoon just to get these two shelves looking like they do?!! 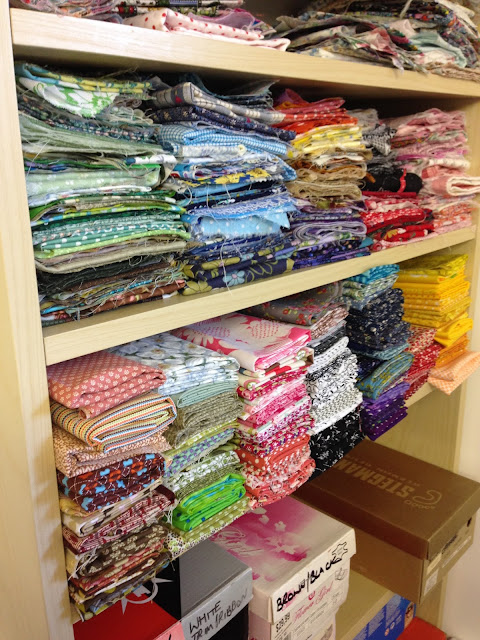 Tidying and sorting is something that often gets put to the side for a lot of us because we'd rather be sewing right?  Well what a difference this made to my sewing.  Later on that night I popped down there before I went to bed and I was able to easily and quickly locate fabric to have a play with these triangles.  I think I am going to enter a Guild Challenge where equilateral triangles play a major part, well the only part really, so I made a couple of foundation pieced triangles as an experiment. 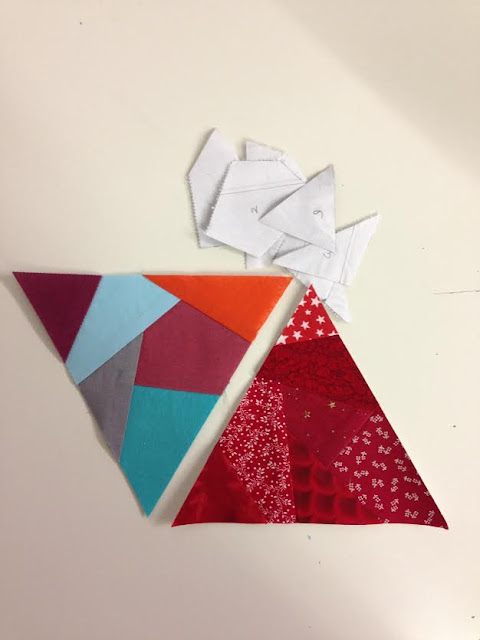 I managed to get a Project Linus top on my frame over the weekend which was great.  It was a bit of struggle initially because it was rather out of square ...... I had to take off the border it came with, give it a bit of a trim and then piece on some new borders.  It still wasn't great but I managed to get a nice stippling pattern all across it and hopefully some child will be cheered up to receive such a lovely colourful quilt. 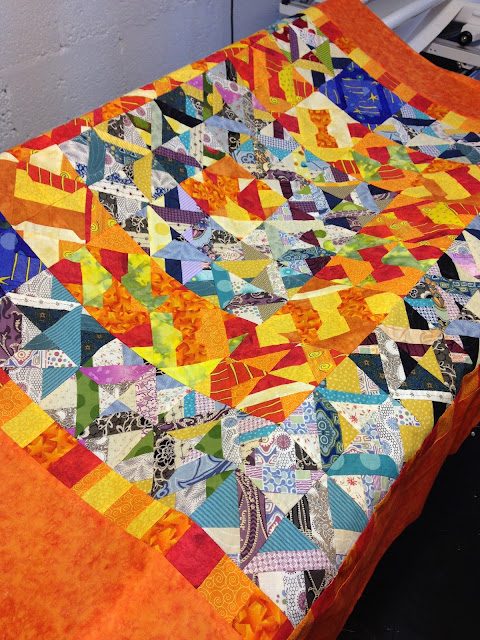 My other love, which I realise I haven't blogged much about at all, is crochet.  I learnt as a child and usually always have a project on the go.  A friend recently asked if I could make her a gecko, he's going to be the mascot for her new branding line, so I jumped at the chance.  Here he is .... 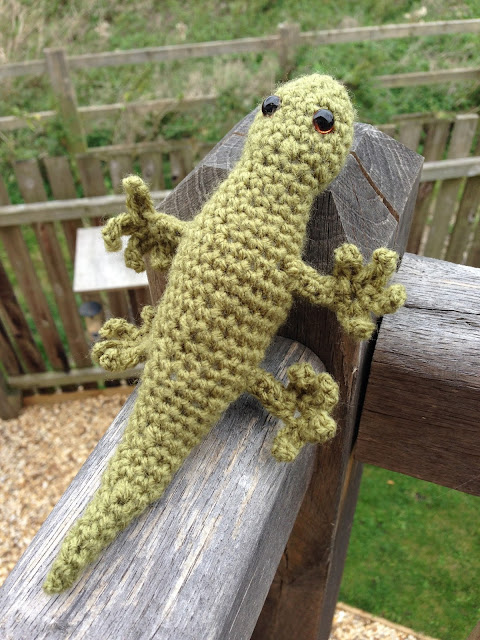 Again this was made to another person's pattern but I did take some take some liberty with the pattern and made it to a hybrid theirs/mine version! x

I am going to link up with Let's Bee Social and WIP Wednesday today.
at September 16, 2015