My Rainbow Mini quilt started with an evening making scrappy stars from fabric scraps with dots - my partner specified she liked dots!  There was no further plan than that. 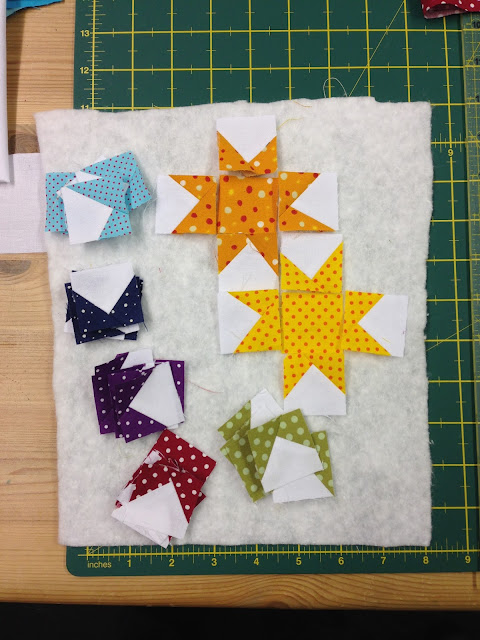 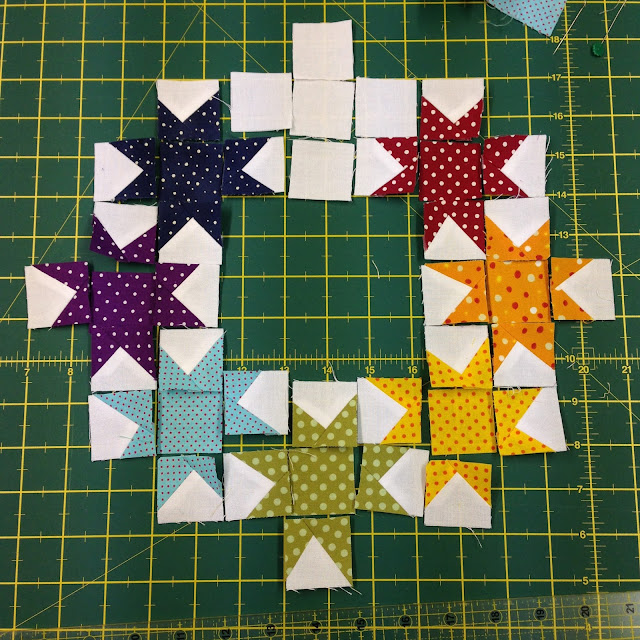 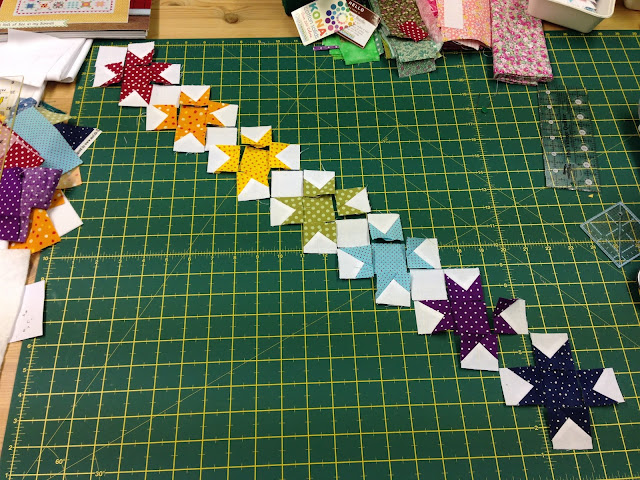 Luckily I noticed that the rainbow colours were in the wrong order before I stitched the stars together.  I opted for Layout 2 for my partner, but think I will make another one for me that is based on Layout  1. 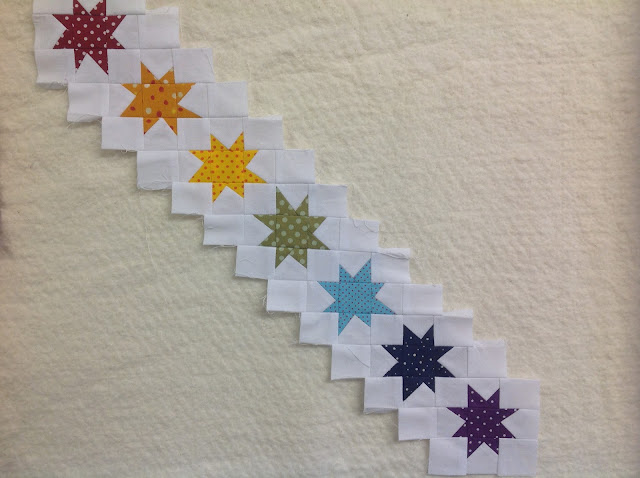 Each finished square is 1". 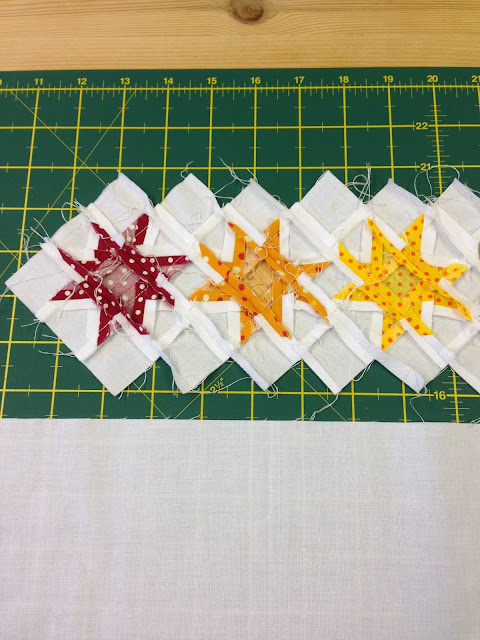 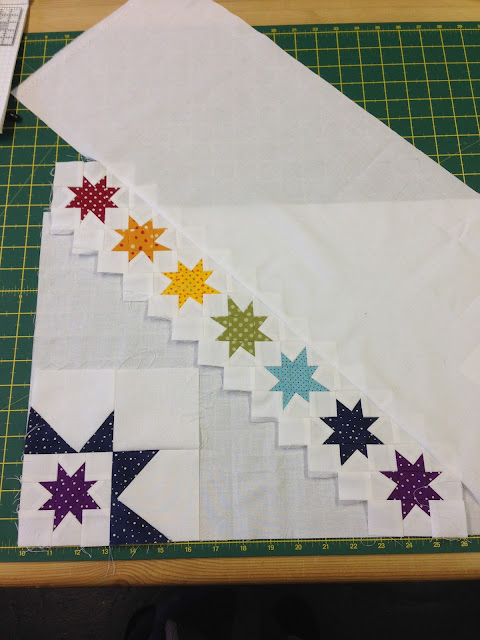 I had some other star bits on my design wall so put them together so they would fit in the bottom left hand corner. Lots of angles and bias edges to work with ... 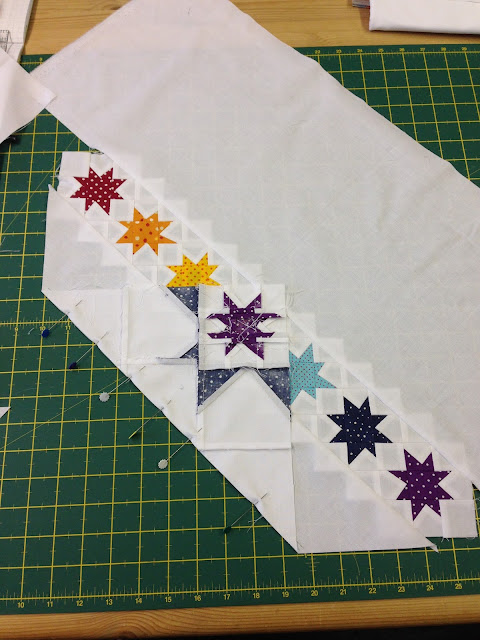 I was very happy when it got to this stage! 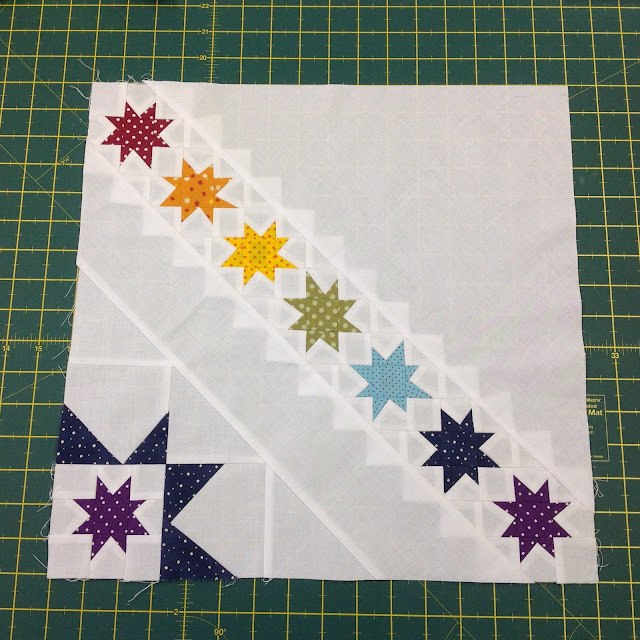 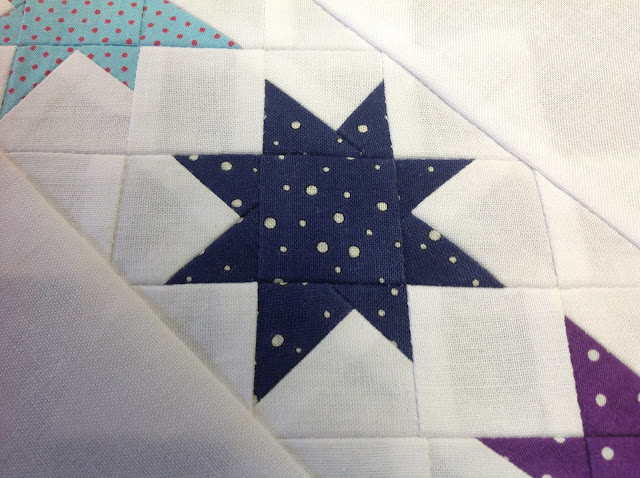 Now how to quilt it?  It sat like this on my frame for over 2 days! 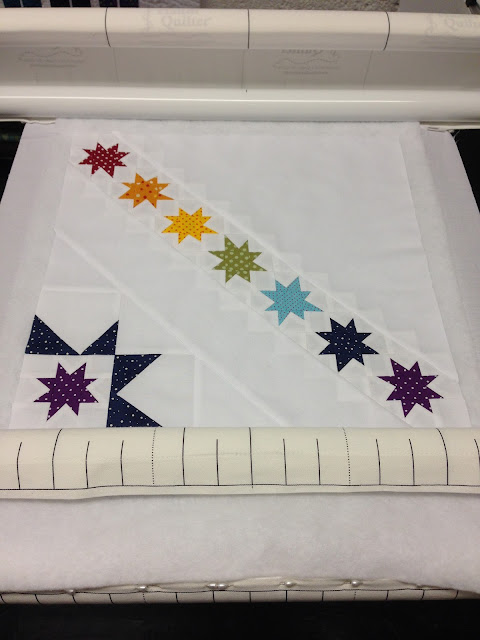 I decided to be brave and try some ruler work to pick out the step like effect of the stars. 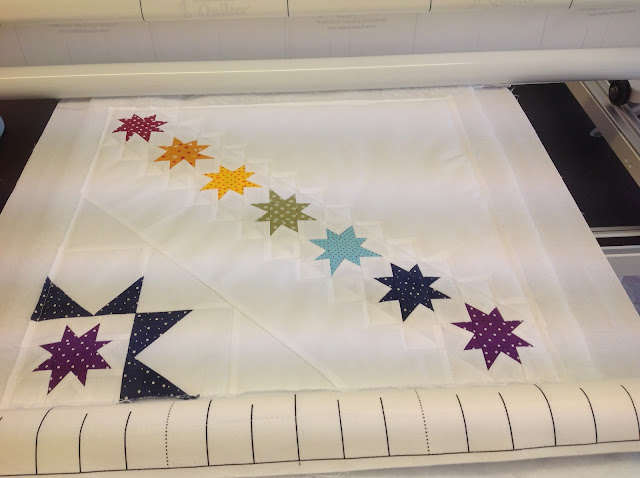 I was really happy with how this turned out and may, just may, become a convert to ruler work!! 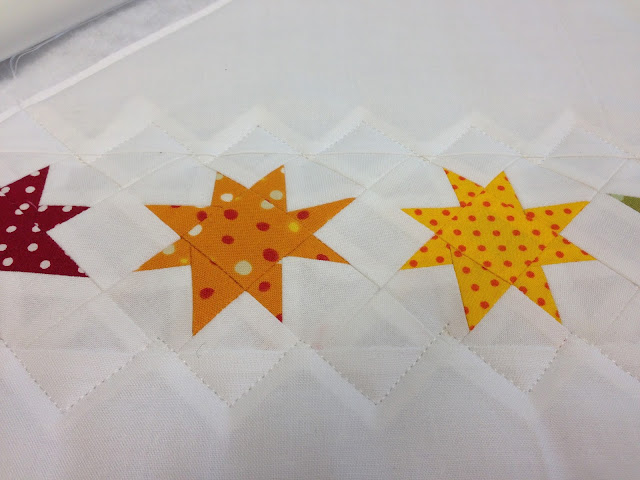 I echoed the first step line and then walked away not sure what to do next.  In the end I decided to go for some feathers as a contrast to the geometric shapes already quilted. 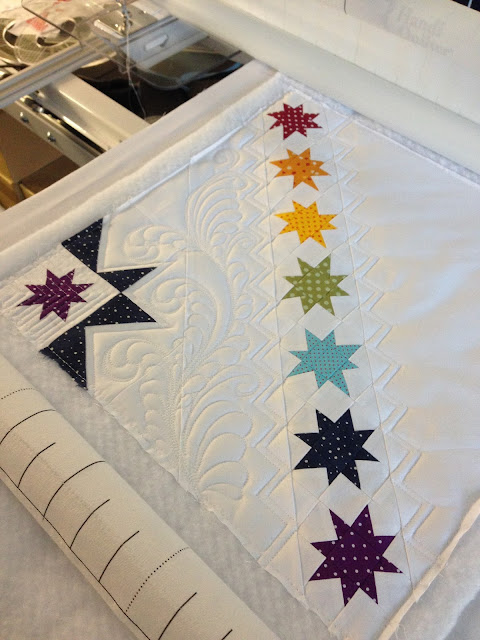 Something different on the other side or a mirror image?  Well not an exact mirror image but similar!  I quilted a copy of the star in the bottom corner into the top and then put in another long feather. 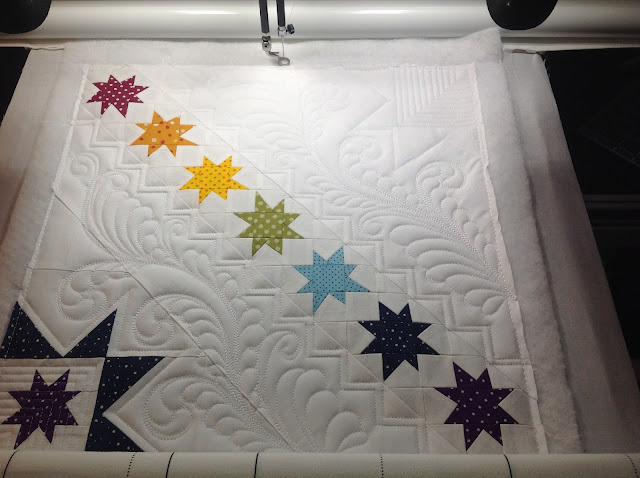 Each time I did another portion of quilting it amazed me how it changed the quilt.  I thought I would then do pebbles between the feathers and the straight lines.  I started at the top of the quilt, did about a dozen pebbles and then the thread broke.  I am really glad that happened because I totally changed mind .... 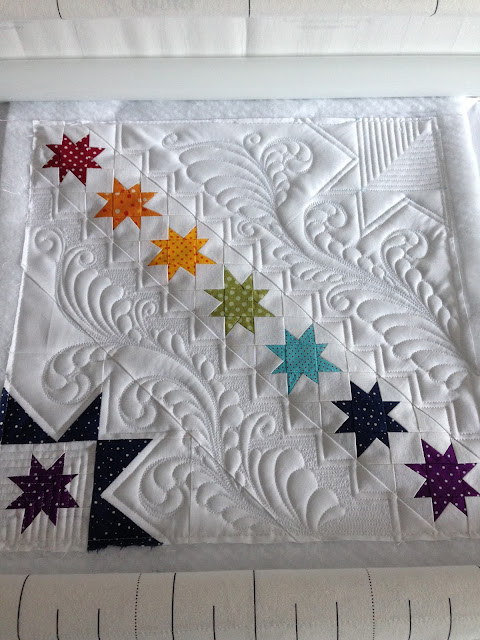 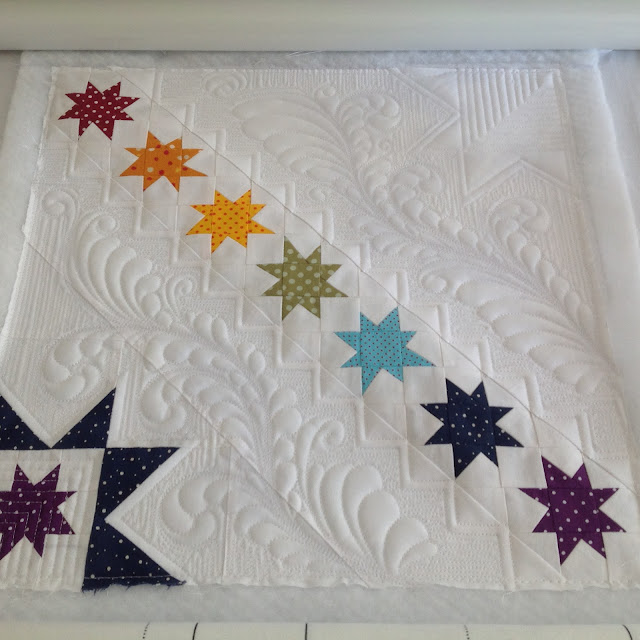 The outside stars were again quilted with a ruler using echo quilting. 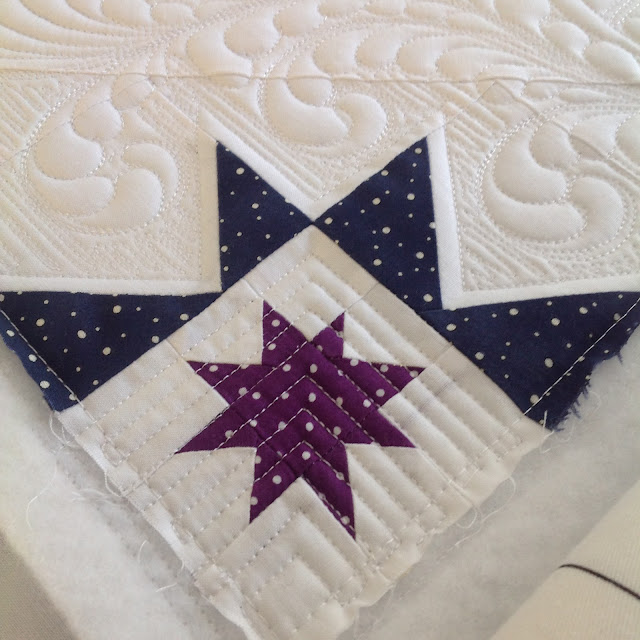 All the quilting in the negative space left the central star panel rather raised.  I wasn't sure what to do in it.  I had a couple of ideas but because the stars were scrappy several of the designs I thought about would have looked funny and inconsistent.  In the end it was more step lines and then echoing. 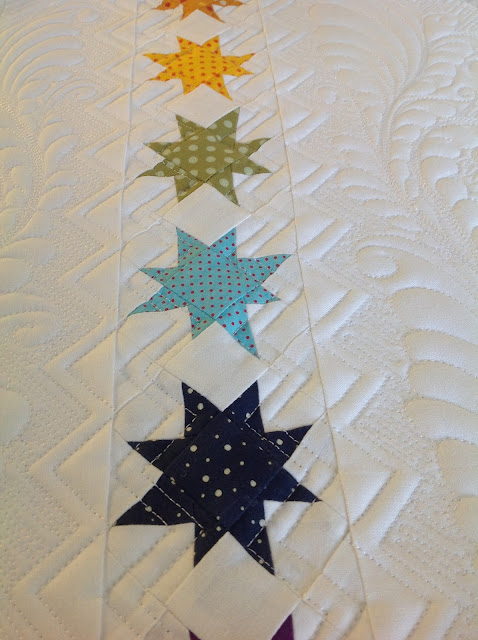 So close - I love it when a quilt gets to this stage!! 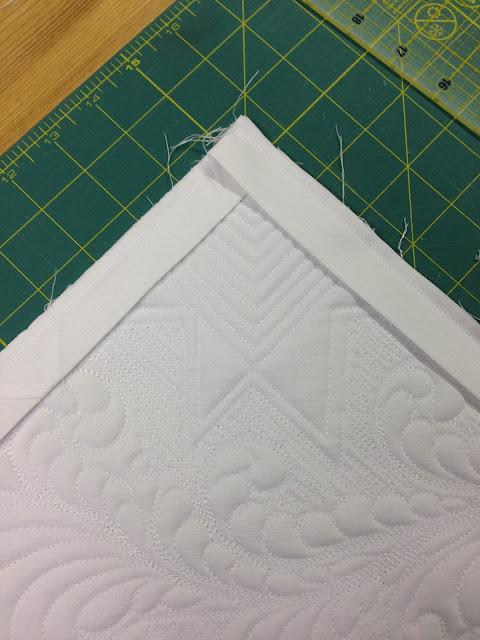 And the end result - I really liked how this turned out in the end and was quite sad to have to package it up.  I haven't yet started on the one for me but I hope I do! 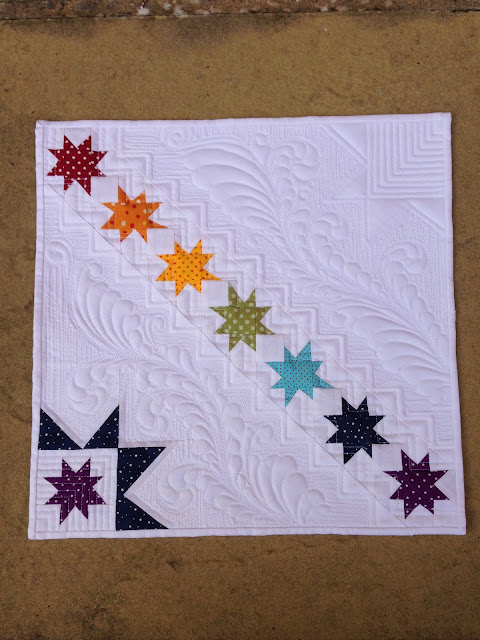 This was sent off last week, so hopefully will soon be with my swap partner over the ocean. x
at March 09, 2016

Give your machine some regular TLC! Tomorrow is the 1st of the month so, if you are not a regular cleaner of your machine, mark on your di... 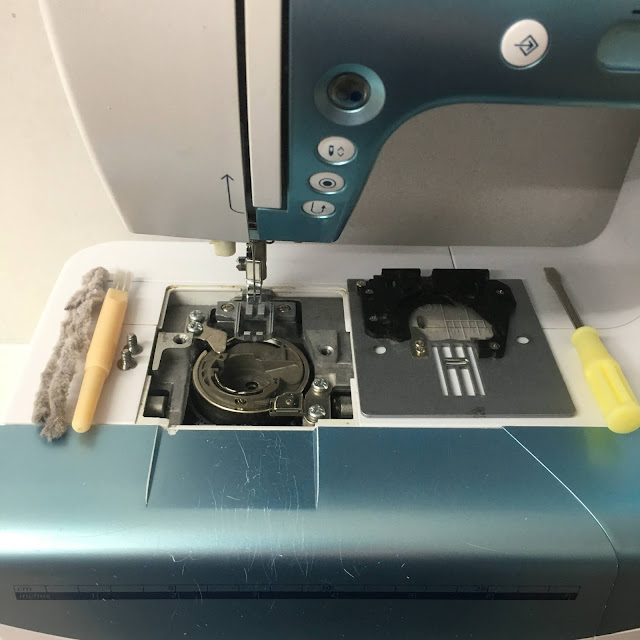