Finish Along Quarter 3 No 1 :: Dachshund Cushion

Both my girls are majorly into dachshunds at the moment so, as we won't be getting a real life one, I thought they might like fabric ones.  I bought two patterns from Tartan Kiwi and set to making the first one for my daughter's birthday at the beginning of September.

If you look at the scale of the cutting mat you can see exactly how tine some of those pieces are .... 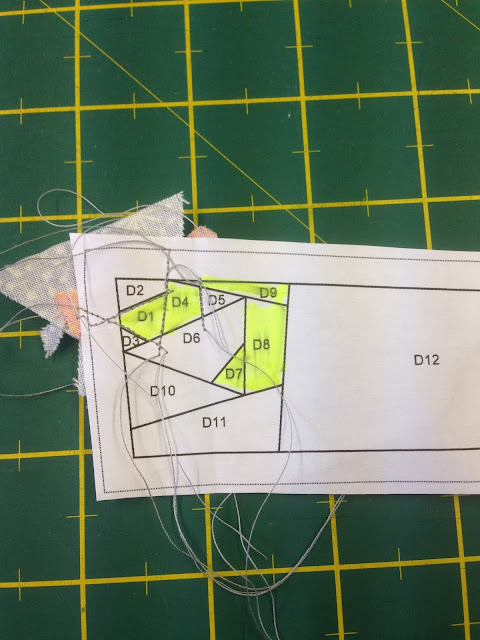 I was running a little late so all she got was this little block in an envelope with the option of it becoming a mini wall hanging or a cushion cover!!  This block measures 6 1/2" x 8 1/2". 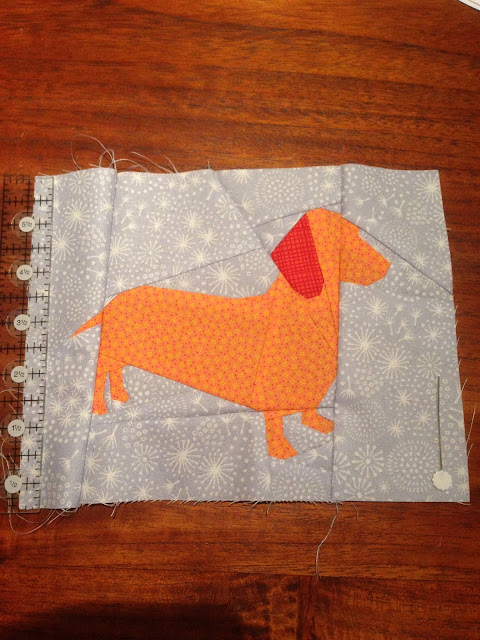 She chose a cushion cover and I happened to have a rectangle cushion inner, but it still took a few weeks to finish! 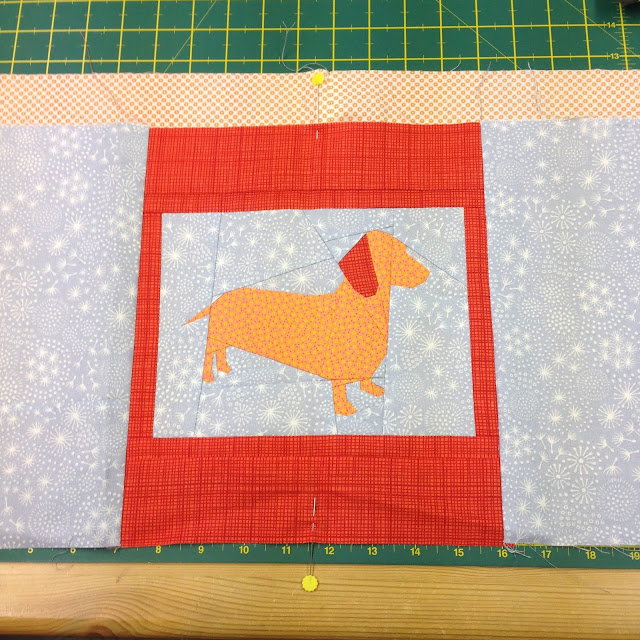 Making do with what fabrics I had, and also not really knowing what I was going to make with it when I started, meant that it truly became patchwork as I made it up to size!  It was finished a week ago but I only had indoor shots .... 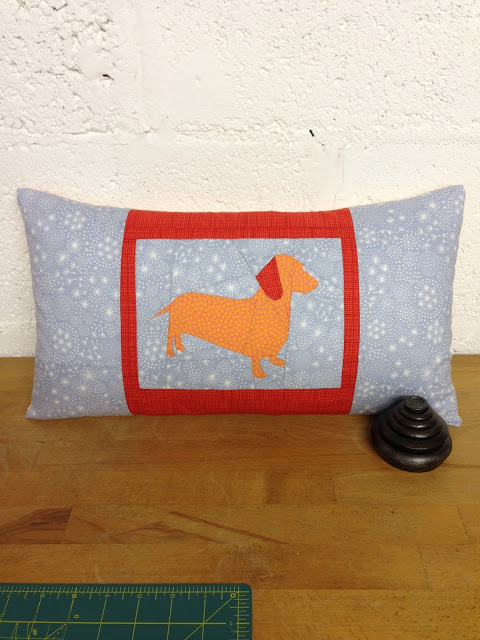 The sun was shining today so I took him outside!  And I had the realisation that, in my hurry to get him finished, I made the cushion cover without giving the front any quilting - can't believe I've only just realised. 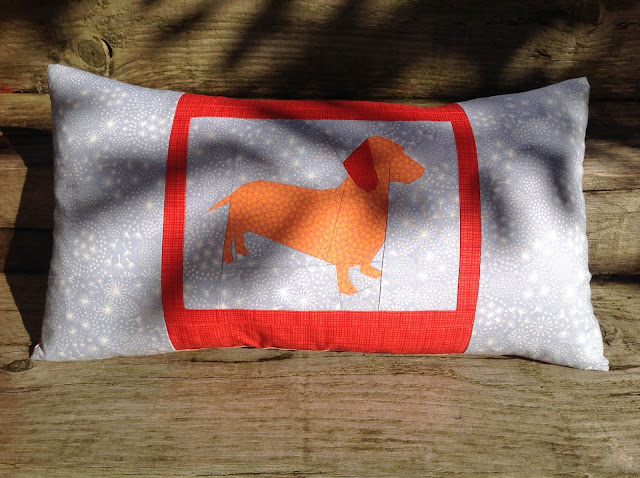 However, I still think he looks pretty good.  I make my covers a couple of inches smaller than the cushion inner and that way they are plumped up well.  I think that's a saving grace for this one with no quilting. 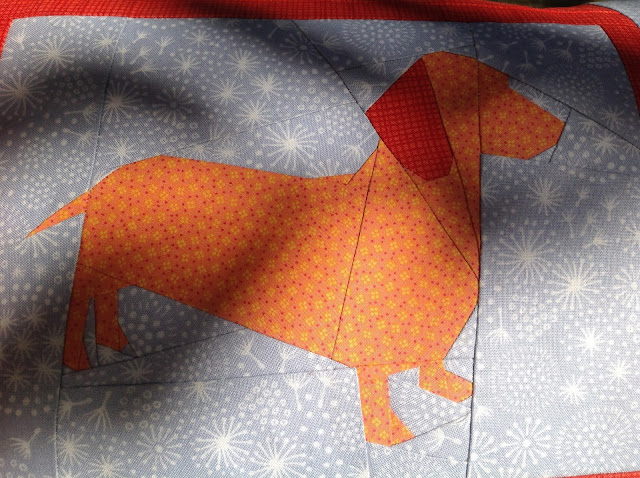 I made a zippered opening on the back with some white and orange fabric I had in my stash.  I have to admit that I forgot how to put in a zip so some unpicking ensued but I got there in the end.  However, I used a zip I already had because I didn't want to wait any longer.  It was smaller than it should have been and I was lucky to be able to get the cushion inner in there ..... I certainly have learnt my lesson and will wait next time until I have the right zip for the job. 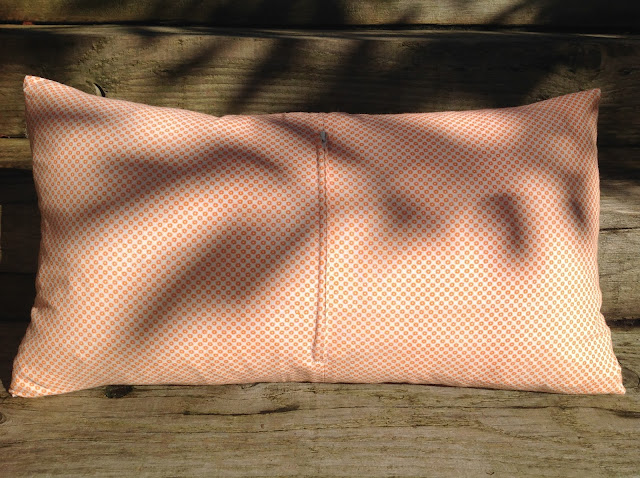 And in its final resting place! 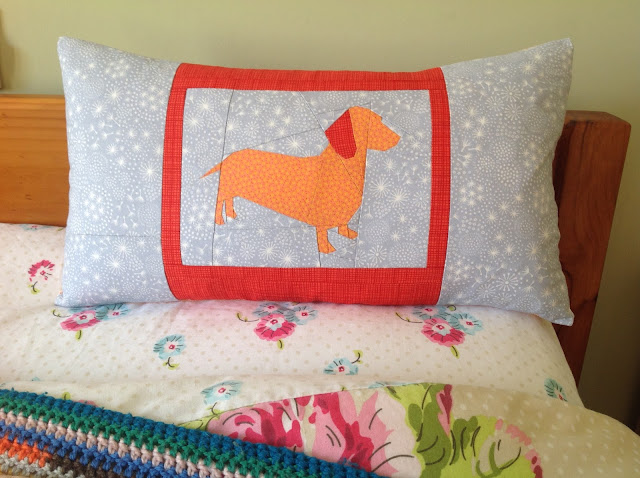 Dachshund No 2 is in the works - again the piecing was finished in time for my other daughter's birthday but I didn't have a cushion inner the right size to finish it.