Should I Stay or Should I Go?

Last Wednesday I showed you the start of a new project, which has now been named Should I Stay or Should I Go?  I spent the majority of Thursday working on the pattern and trying different methods of getting the same result.  I posted a 'finish' on Friday as the fact I had two patterns for the two different quadrants that were reproducible.
So progress since then amounts to .... a lot of work but only one photo!!! 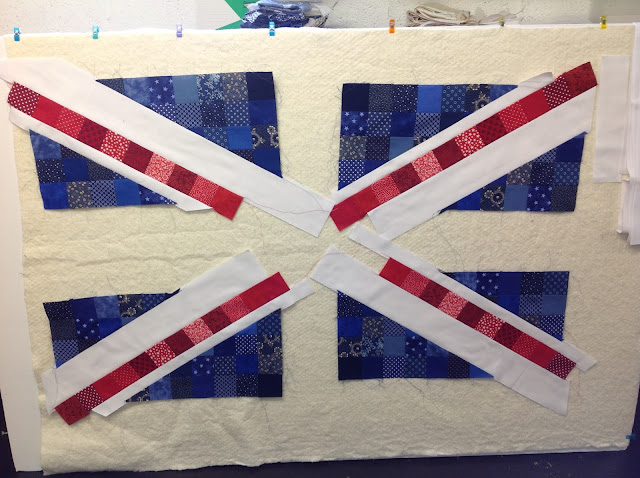 These blocks need to be trimmed and will square up to 12 1/2" by 20 1/2" and be bordered on two sides by 2" white, which is cut and waiting to be sewn on.  The next step is to cut 111 2 1/2" squares in the red materials and get piecing!
My husband left for New Zealand on Sunday so the weekend was spent with him and then the last couple of days have been spent finding a new rhythm to our days ...... Tomorrow morning is planned as child free studio time so I am hoping to have this flag close to finished - then I just have the NZ flag to tackle!
I am linking up to Let's Bee Social again this week over at Sew Fresh Quilts. x